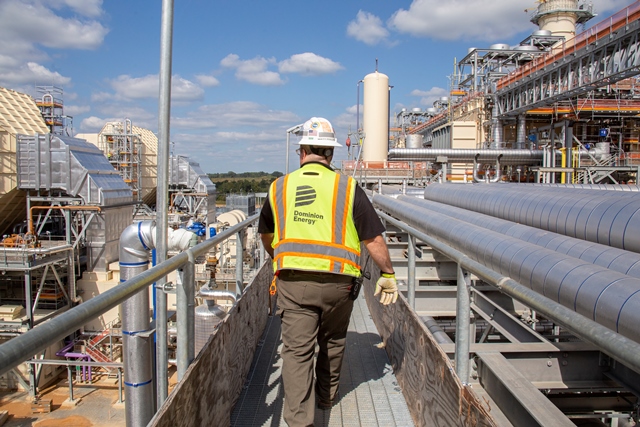 “Greensville is a much welcomed addition to our Virginia service area,” said Paul Koonce, chief executive officer for Dominion Energy’s Generation Group. “It will be a workhorse, running around the clock to provide our customers reliable, low-cost energy. It will also complement and support our growing solar fleet.”

The station is the largest power block of its kind in the world. It uses three combustion turbines to produce electricity and steam, which is used to make even more electricity. Environmentally, especially in terms of carbon emissions, Greensville is one of the cleanest natural gas powered stations in the country. The station’s air permit has the strictest CO2 limits in the nation.

Michael Ferguson, chairman of the Greensville County Board of Supervisors, said, “The Greensville plant will generate reliable energy for Virginia homes and businesses while bolstering job creation and revenue for Greensville County. We look forward to a continued long and successful partnership with Dominion Energy.”

The $1.3 billion power station was completed on schedule and on budget. Construction began in June of 2016. The Greensville station represents Dominion Energy’s second large investment in Southside. In 2016, the company opened its $1.1 billion, 1,360-megawatt Brunswick County Power Station located just a few miles away.

Both power stations are already served by a natural gas pipeline and to improve reliability and reduce customers’ bill they will be connected to the Atlantic Coast Pipeline when it is completed.

Sen. Louise Lucas, representing the 18th District, which includes Greensville County, said, “The Power Station is a huge boost to Southside. And the fact we will soon have two major gas pipelines serving this area holds the promise for even more economic growth.”

The power station will have a positive impact on the region’s economy. In its first year of operation, it is expected to provide up to $7 million in property taxes for Greensville County. Post-construction economic benefits are projected to amount to about $36 million annually, and about 166 jobs will be supported, with roughly half of those in Greensville County.

Del. Roslyn Tyler, representing the 75th District, said, “We are proud to have the station here in Greensville and with the sister power station in Brunswick County, I think we can truly say Southside is open for business.”

At the height of construction last fall, more than 1,800 workers were on site at Greensville. The station will have 49 full-time employees.

Over its expected life, the station will save Dominion Energy customers about $2.1 billion as a result of the company not having to purchase power from market sources.